Just been to see God's Own Country in the cinema. It's a local production, all filmed within a few miles of Bradford and its rooted in the moors and farms of the place. Maybe I'm biased because its become my home, and lived half my life here now, but that first and foremost had drawn me to see it.

I've seen a review that described it as a British Brokeback Mountain. Having also seen that film I don't really agree, because while it's about two farm workers who fall for each other that is basically where the similarities end.

21st century rural Yorkshire is not the American midwest of the 1950/60s. Nor is it a film about hiding a relationship from society or about discovering sexuality or even coming out.

Johnny Saxby is basically running a small upland sheep and cattle farm on his own, although he lives there with his elderly gran, and his father who'd worked himself into the ground running the place and is recovering from a stroke. He can't see any future for himself beyond the farm, his friends are off living their lives and he's trapped. He also doesn't want to leave. So he drinks too much, smokes too much and has comitment free and emotionally disconnected sex, because he feels hopeless about his future. Basically he's got a lot problems, some of which are of his own making, but precisely none of them are the fact he is gay.

It is a quiet film, the dialogue often sparse, the landscape and emotions are raw. You feel the lowkey desperation, the little every tragedies and it feels real. You don't know where life if about to take any of them, and there are times when it seems that some things are broken beyond repair.

And while the film is about Johnny and Gheorghe, a Romanian farmworker who has come to help over the lambing season, developing relationship is also about John's relationship with his father, own inability ask for help, the realities of running a small upland farm and the feeling of being trapped by responsibilies that you both want and resent at the same time. Its the disconnect between the rural and the urban, seen when John talks to his old school friends who'd left for college and university.

Perhaps the over arching theme is then simply one of finding hope for the future again and of realising that needing people, that wanting help and reassurance doesn't mean you're a failure.

The film is fifteen rated and i will say now its not an inflated rate due to it being a same sex relationship. There are reasonably graphic sexual scenes and nudity, but they don't feel forced in, like they are their for the audiences titilation, rather they are part of the progression of a relationship, in the same way as how they look and talk to each other changes with growing understanding.

As i said before I am probably very biased as is a local production, but it has won awards, and if you can see it I really do recommend it.

Somehow last night i ended up writing 3500 words of an Anji Kapoor & Fitz Kriener friendship fic. And it still needs about the same again.
Posted via DraftCraft app

So trying to write something that seemed to only have the potential for angst with perhaps a little bit of temporary hope and a whole of even more angst based forshadowing of an unescapable future event in said character's timeline.

Character and his friend promptly shrug, decided they aren't having any of it and take a holiday to the seaside and buy a cream tea.

Yeah one of those sorts of fics.
Posted via DraftCraft app

Okay, so I work as some kind of admin assistant - really my job covers everything from talking phone calls from people whose parent/spouse whatever has died, converting microfilm into digital images, being able to dismantal and clean scanning equipment and knowing regulations about additional pensions contributions for firefighters/bus drivers. It's varied to say the least. I also seem to be in charge of the office pot plants, because nobody much else seems to remember to water them or get them plant food - our end of the office is half underground and they need something to make up for the lack of real sunlight.

Anyway, apparently my job now also includes going on a one day training course about recognising, reporting, preventing and staying safe during a terrorist incident.

Well it gets me out of the office for a day I suppose.

It's funny how a job opening and scanning post can change over the years, especially when you're the last one left of the old team.

So today i managed to forget it was only early september, and somehow convinced myself id missed something thats not actually happening for another three weeks.

I also won a teapot on a raffle and actually managed to get greengages at the local supermarket. They arent quite ripe yet, but i can make us for the tea pot :) big enough for two large mugs as well - so emough for one ;)

I also have fic idea that is odd, its a Doctor Who Sharpe crossover fic, that can't make up its mind whether its drama or farce. Im currently going with both, becuase why not?
Posted via DraftCraft app

Weather was good today, and with autumn starting appear, i thought I have a longish walk.
Ended up doing something over 10 miles. A loop round Harden to see the Goistock Falls, then on into Bingley (which was packed due to a music festival) so headed out of town to see the FIve Rise Locks, then followed the canal path down through Saltaire, Shipley, Esholt and Apperley Bridge.

I'd done the canal sections before, including the locks, but not as a single walk. I posted pictures of them before, so I'll just post the Goitstock Falls ones. 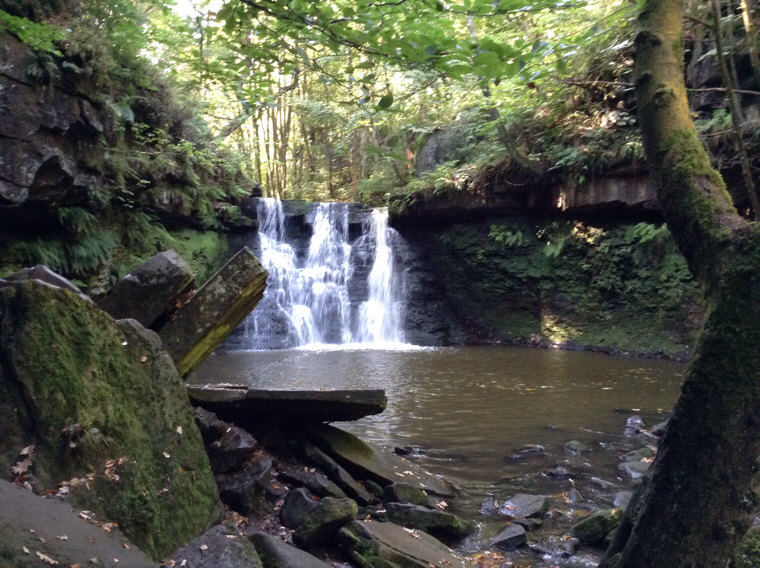 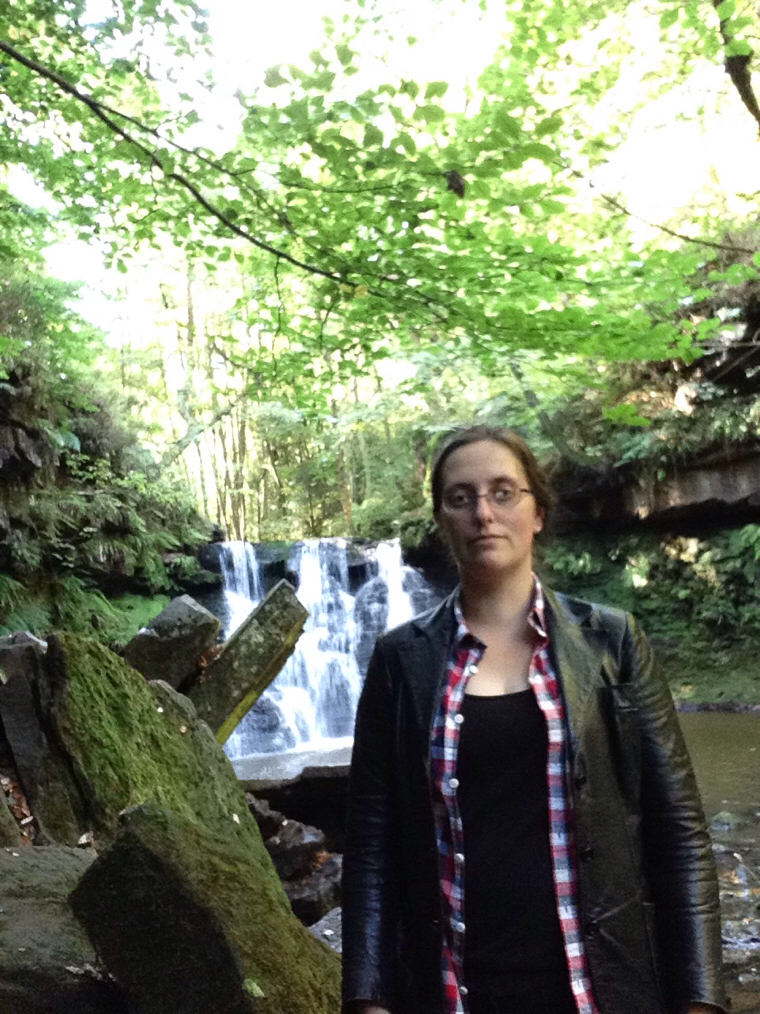 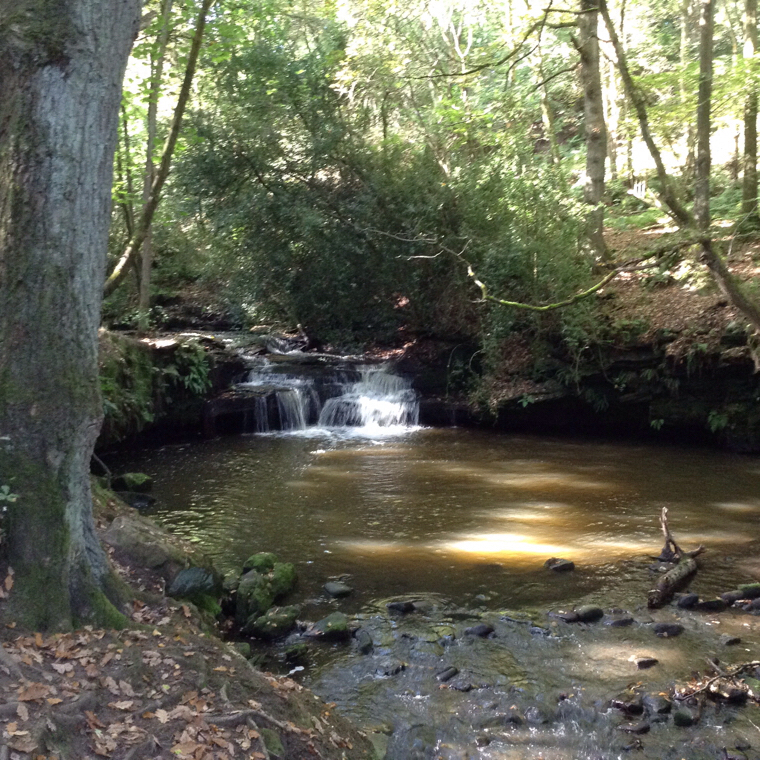 
Note. The Doctor and Fitz's relationship is complicated and this isnt exactly ship fic. They are very close, and i can probably best describe it as romantic friendship. They do love and care for each other, but they don't have a sexual relationship. Whether they will or not at any future point isn't the subject if the fic. I can see both possibilities.

Fitz has got very good at dealing with things being painful and weird, he's travelled with the Doctor for years after all. Sometimes though, despite how self-reliant he considers himself, things can sometimes happen that are too much.

So i really should be working on the next part of Last of the Rift Born. But Ive only managed like three hundred words on it this all weekend.

Why? My brain has currently been eaten by the 8th Doctor novels. I read one yesterday (domino effect) and one today (Sometime Never). And now all i have in my head is Fitz centric fic ideas.

I've managed to write 2k fic this afternoon (I've not written that much in one go for years) of what would be an epsiode tag (if it wasnt a book, book tag?) for Domino Effect. Becuase honestly after the end of that one, Fitz really needed a bit (a lot) of care and looking after that.

I also have other fic ideas in my head. But it's all end of the Time War stuff, and there's only one way that's going by the end of it.

So i wrote a fic called Fractal Time and Temporal Vertigo. Posted it a couple of days ago.

This morning I'm reading 'Sometime Never' which is one of the 8th Doctor EDAs. And there's the phrase. Fractal Time. And the story ends up about these crystal creatures who are manipulating time streams.

Not the same as the Potential Crystal from my fic, but still about timelines being altered and manipulated.

Very strange feeling indeed. A very blink at the screen, what what? Moment.

So bank holiday weekend and all that. Not so small wanted to go to the fair. Its been a while, but why not.

Dodge-ums are fun. I don't mind the little chair-a-plane thing. And carosels are nice. Not so Small didnt like the look of the big wheel, so that was a no. And theres always candy floss.

Then there's the whirlitzer ride. All bright and flashy, not so small likes the look of it, and homestly it looks like a suped up tea cup ride. All wavy floor and spinning seats. So i agree.

All i can say is never again.

The wavy up and down was fine, the speed of it and the sudden sharp direction changes on the seats, so that you felt gravity hit you and slam you backwards was definitely not. That it went on for a good five or six minutes, based on the fact they played two songs while we wizzed about didnt help either. I'd been ready to get off after less than one. More than ready.

I spent almost the entire ride with my eyes shut waiting for it to be over.

No so small whooped, yelled and absolutely loved it and wanted to go around again.

Ice cream based bribery subsequently happened and he was distracted by a hook a platic duck game. So from the perscpective of nearly eight year old no so small, it was a brilliant day.